I directed this production during my junior year of college, choosing Henry for its complicated father/son relationship with Hal as my obnoxious avatar. This was the first play I’d ever directed, and the experience was potent and heady. I adored talking with cast members about their character arcs and working with designers on set and costumes. My favorite part of the process was editing the text during the summer before rehearsal. I took a heavy-handed approach, making Mistress Quickly (played by the fabulous Sarah Hedgecock) the Stage Manager of the show, controlling the action from behind her bar. God only knows how that choice was supposed to further the story — 20-year-old Elizabeth would’ve mumbled something about fate and free will — but I was making bold strokes on the page, and it felt wonderful. The show received a lacklustre review in the Princeton Paw, complementing the cast and disparaging the modern costumes. I used to be embarrassed of this review, but now I feel proud that the young critic could tell what was going on in the play.

Shakespeare’s “Henry IV: Part I” is brought to life by an excellent cast

Though the Princeton Shakespeare Company’s production of “Henry IV: Part 1” is occasionally stilted and confusing, a sterling cast makes for an undoubtedly fun and thought-provoking evening out.

“Henry IV: Part 1” is one of Shakespeare’s least known but most effective history plays — and in this production, director Elizabeth Swanson ’12 makes the bold decision to modernize the setting. King Henry IV’s eldest son, Hal (Nicolas Hybel ’12), has rebelled and is now hanging out in a bar with outlaws such as Falstaff (Joshua Zeitlin ’11) and Poins (Evan Thompson ’14). An upstart son isn’t all the king’s got on his hands, however. Henry IV is also trying to suppress a revolt of the Percies clan, one of whom — Mortimer — may have a claim to the throne. At the play’s emotional climax, Hal goes to his father and repents, and vows to kill Hotspur (Tadesh Inagaki ’14), leader of the Percies revolt.

Hal’s reconciliation with his father – which provides the play’s main emotional arc – is effectively staged. When Hal eventually greets his father, he genuinely does seem to be seeking forgiveness.

The friendship between Hal and Falstaff is the show’s most poignantly-depicted relationship. Hybel and Zeitlin banter in an utterly convincing manner, exchanging teasing quips with the habit of old friends. Hal and Poins (who walks with a very specific bow-legged swagger) plot to rob Falstaff and others of their recently acquired loot, and Hal listens to Falstaff’s exaggerated tale of his encounter with two, now four, now eleven enemies before laughingly rebuking him and proving Falstaff’s story wrong. Then Hal and Falstaff are suddenly role-playing Hal’s apology and reconciliation with his father, Henry IV. All these exchanges are pulled off with zest by the performers.

As Falstaff, Zeitlin is responsible for much of the play’s comedy. His performance complicates our perception of Falstaff as a mere clown, however. Zeitlin is able to play both the humor (as when he rolls Hotspur across the stage, having stabbed the already dead man once again in the thigh so as to get credit for his death) and the grimmer aspects of Falstaff’s character with an even hand.

Sir Henry Percy (or Hotspur) and Lady Katherine Percy (Julia Keimach ‘12) were also fun to watch, as the actors created a sense of relaxed intimacy that rung true to their characters’ relationship.

Despite the strength of the cast, there were some elements of the production that left me cold.

Most notably, the decision to modernize the setting of the play wasn’t easy to follow. For much of the play, Hal, Poins and Falstaff seem to have come from some ‘50s biker flick, cruising around on motorbikes and pulling out guns to rob people. But for the final battle scenes, the very same characters were suddenly using swords and daggers in one-on-one combat.

At the same time, however, the choice of costumes was effective in differentiating between the play’s many different groups of characters, creating a strong sense of social hierarchy. At Mistress Quickly’s pub, actors wore jeans and a white t-shirt; in Henry IV’s meetings they wore dark business suits; and for the battle scenes, they wore a color-coded shirt (white for Henry IV’s side, black for the Percies), and cargo pants. The lighting and set emphasized the differences between Hal’s new environment and his old one. The battle scenes were well-choreographed and fun to watch.

Despite an extremely short rehearsal process, the Princeton Shakespeare Company has produced an enjoyable production of one of the Bard’s most under-rated plays. It’s definitely worth a trip to the Frist Performance Theater tonight or tomorrow, even though you may walk out with a few unanswered questions.

Pros: acting and details of characterization were very strong.

Note: There was one hilarious comment at the bottom of the review, left by a champion of the show: “Have you never actually seen a Shakespeare play before? FFS, get better reviewers, Prince.” 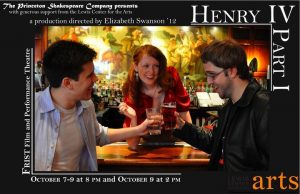 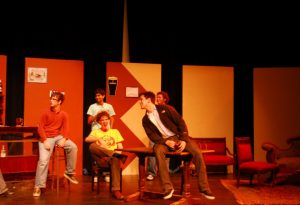 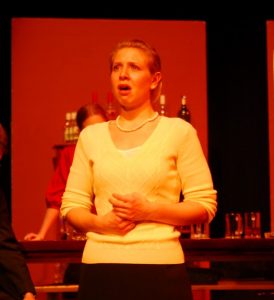 Want to work together?